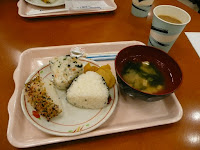 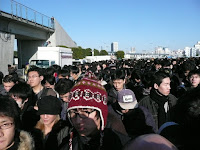 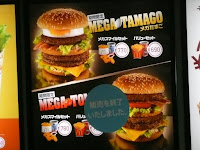 The day started out like it has but earlier. The complimentary breakfast of champions as seen above, made lovingly by nice elderly ladies. I really like the Toyoko Inn. It's clean and the staff are really helpful and nice. Then off to the con.
I have survived the last day of 'ket. Whew what a ride. The crowd was much more like how american conventions used to be between the sexes, much to my shagrin. Probably about 99 percent men as the picture shows of us waiting, unlike the second day where it's about 95 percent women who are picking up their boy love doujinshi. Sorry I wasn't able to take any pictures inside but they don't allow any photography inside. The asiles were crammed with otaku and sometimes you were pushed along wheather you wanted to go a certain way or not. But by the end of the day it was a little less crowded and you can move around but some of the more popular circles were already gone for the day, having sold out of their books. :(
Andrew and I were starving by the time we were done so we stopped by the McDonald's before getting on the train to have a Mega Tamago set. I don't think you will see them carrying this back in the States, with the general health concerns, but boy was it tasty. It had a nice spicy black pepper sauce that complimented the egg nicely.
Tonight I think we're going to take it easy and go out and see how they celebrate New Year's Eve. Andrew says it's not really this night that's the holiday but New Year's Day, where you go to a temple and wish for a good new year and such. Hopefully we'll be doing that tomorrow.
Posted by artboymoy at 1:46 AM 4 comments: 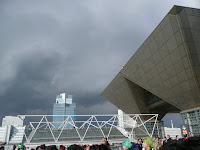 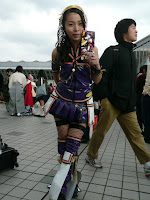 It was a beautiful morning. Sunny and warm, maybe 60 degrees. Felt like spring. The second day of the con was focused more on the boys love doujinshi, so really not my cup of tea, but I did find some stuff to service my needs and needless to say we were out of the halls and back onto the cosplay patio. The moment we got up there there was a front coming in but I managed to get some nice shots. Once the front started moving in it got really cold and some cosplayers couldn't keep their head gear on. Andrew and I headed out and went to Shibuya which is another shopping district and we were going to hit Harajuku street but it was raining and crappy so I doubt the people who normally dress up and show off were there. :(
Day 3 is where the exhibitors sell pretty much all the hentai stuff, so needless to say it'll be packed. Need my rest.
Oyasumi nasai!
Posted by artboymoy at 7:26 AM 1 comment: 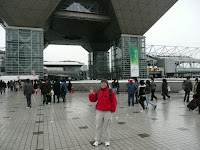 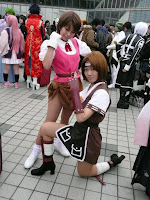 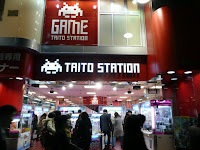 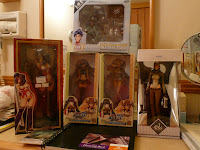 End to an incredible day in Akihabara. The second trip after we returned to the hotel to drop stuff off, I decided to take it easy and just shop for some figures. Some real nice finds and I played at a ,whatchacallit claw machine game for the first time. Yeah they took about 1700 yen of my money but most of that was on the first figure while the second figure took 5 tries. They're the two figures below the Bubblegum crisis figure. Will be making a return trip to see what the other toy stores have, but tomorrow is the first day of 'ket so I need me rest. 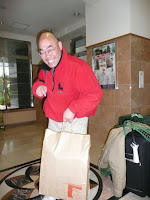 Here's the bounty from the first trip to Akihabara from the Toranoana... full o doujinshi... The bag weighs about 40 pounds. Next up, figures.
Posted by artboymoy at 11:37 PM No comments: 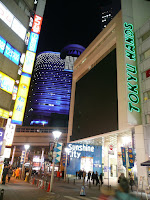 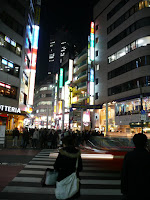 after running to catch a plane in Dallas Ft. Worth I made my connection and suvived the 13 hour plane ride over here, only to find that my luggage didnt. Thats okay because I have to wait for my friend and guide Andrew to arrive in a couple hours. The next flight from Dallas had my bags on it and met up with Andrew. We made our way from Narita to Tokyo via the train where our hotel was waiting: the Toyoko Inn chain. Very nice and clean although a bit small if you dont mind, which I dont. We finished out the evening by walking around the area and Andrew gave me the 2 yen tour and managed to get some shopping done at an anime store called toranana, but only managed to get an hour in before they closed for the night and then at a Yoshinoya and had a lovely beef bowl set. The weather is nice and cool compared to the tundra like weather Wisconsin was in. Not really jet lagged so I should be good to go to take on more running around. Ganbarre! (Ill have to check my spelling on that, plus the keyboard are kinda funky with the multiple shifting so my puncuations a little off, its a learning thing....)
Posted by artboymoy at 2:57 PM 2 comments: 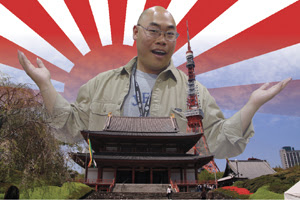 Yup, in a couple days I will be heading off to the land of the rising sun and Fujiyama. I hope to post some photos of my trip here as the trip goes on. This isn't my first time to Japan, but it'll be a first for me as I'll be attending Comiket and seeing what that's all about and looking for doujinshi, manga and other books that seem hard to come by in the states. So check back every now and then and hopefully there will be something new to see. Ittekimasu! 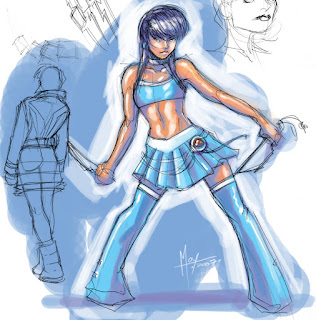 Aside from anime and manga, Japan also offers the world of Race Queens, or at least that's what I see them called. I guess they're cheerleaders for the racing teams. I've picked up some mooks and magazines that feature them, because they offer some inspiration for costuming and look just so darn cute. Here's a little drawing I did during a sketchnight and colored up in about 10 minutes waiting for a meeting for some work.
Posted by artboymoy at 11:03 AM 2 comments:

Have a Video Game Gals Christmas 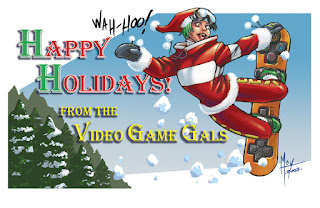 This card was a little bit of a rush job. Some elements didn't quite make it into the final piece, oh well. The card was in the planning stages for more than a month but I just never got around to working on it. Shame on me. Have a safe and happy holiday.
Posted by artboymoy at 1:27 PM No comments:

The new theme for the Ravensoftart blog is a holiday card and since I normally do one anyways, I'll have something to contribute. Here's a rough for the piece.
Posted by artboymoy at 7:59 AM No comments: