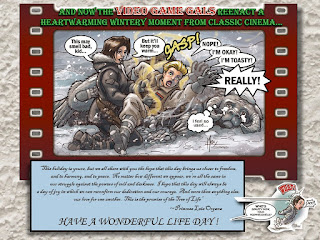 Yep, it's that time of year again where we find ourselves dashing about, getting ready for the holidays, and traveling to see family and friends. If you do travel, may you have a safe journey and I wish everyone to have a great and prosperous new year.

For those of you that are still waiting on commissions, please be patient as I hope to get to them over my winter break. What's been keeping me so busy? Well, besides shoveling snow, Raven Software has been working on getting the X-Men Origins: Wolverine game to the finish line. If you haven't seen the trailer for the film staring that People's Sexiest Man Alive winner, Hugh Jackman, check it out here. Looks to be tons of fun.

TAKE CARE AND LIVE LONG AND PROSPER.
Posted by artboymoy at 6:53 PM 1 comment: 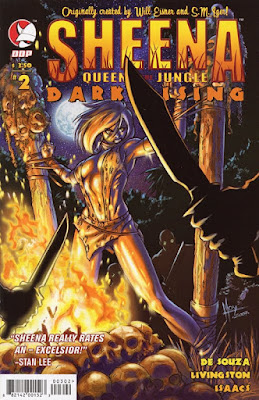 After being done over a year ago I'm happy to say, "There it is. It feels good to have something on the stands again. So go out to your local shop an pick one up. It's one of three variant covers for this issue and published by Devil's Due. So, let's see how I went through my paces for this cover. 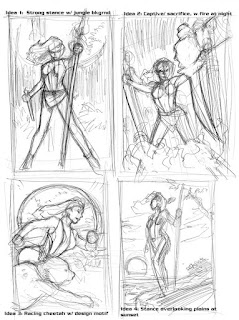 I was approached by Devil's Due Publishing and asked to do a cover for Sheena. Simple enough, but they didn't have a story for me to base it off of and so it would be a stand alone pinup type cover. The challenge lays in coming up with an idea that's different from what's been done before or what they might be sitting on. So I came up with the four concepts to the right. My hope was the heroine tied up image, kind of an homage to the pulp covers when Sheena was originally published. Plus it kinda tells a story and I think that makes it more interesting. Maybe they'll do a story based on the cover? That'd be cool.

I can't remember if they left it up to me or if they agreed that the tied up heroine was more interesting and that's the cover they wanted. So I did a prelim drawing, much tighter than a rough or thumbnail. This is the drawing I would blow up and transfer to the board and tighten up even further for the final pencils.

There was to be some changes to the original idea, which was that the figures who tied Sheena up were not to be the "tribal headhunters" as often seen in those old stories. Simple enough, I'll just keep them in the shadows and make the knife less sacrificial looking. Originally I had the knife coming down from the top of the cover and into the middle but after showing it to, my bud, Cory, he suggested having the knives coming in from the side and even adding the second knife. 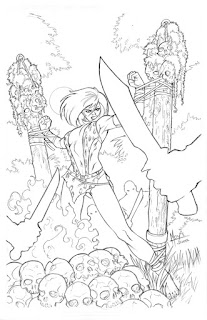 After workign up the prelim, I blew it up to full size and lighttabled the image to the board. I tend to transfer the lines light so I can erase them easier and make changes if need be. Since I was going to color this on the computer I was just going to scan the linework in and darken them down, so this meant I needed to make sure the pencils were nice and tight.
The first version I did after I penciled it was pretty much good to go, but the face and proportions kinda bugged me. 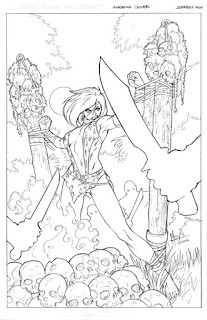 She wasn't cute and petite enough, so I redrew the face face on the board using the prelim face directly and would mess around with the proportions in Photoshop after it was scanned in.

I don't do enough of it and every time I get back to it I have to relearn it. But there are artists I love to look at for their coloring: Shirow Masamune, Adam Hughes, Ugetsu Hakua, Hyung Tae Kim are ones coming to mind. Mind you, I am no where near getting my stuff to look as good as their work. As for the piece, I wanted the lighting to be coming from the fire pit and some nice rim lighting from the moon. Shadows would be cool pallet and the fire would be warm. Pretty standard. I tend to work in layers for the differnet elements: Sheena and the posts, fire pit and fire, foreground elements, background, and back drop. I tried to get her skin so it glistened a bit to get the feeling of heat and exertion. A little compositing for the night sky and it was done. Yeah! Sent off a high rez version and waited to see when it was going to be published. 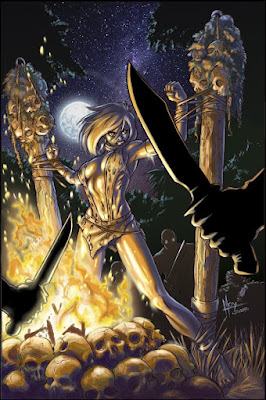 Catching up on old stuff... 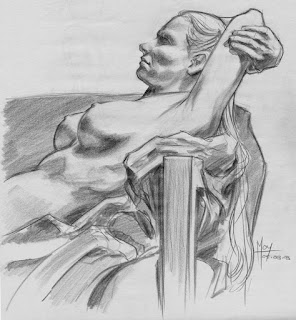 Well it's not really all that old, but it has been a while since I had done these. They were done during a figure drawing class I attended and were both done during the same sitting. I forget which was done first. Maybe the ebony pencil on the newsprint then the color pencil on the canson paper.... I don't suppose it really matters but there you go. 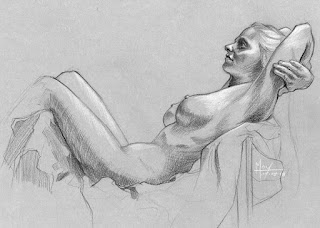 Posted by artboymoy at 4:34 PM No comments: 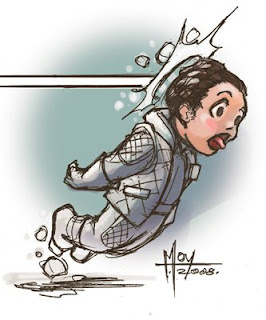 Well, Madison is in for a winter storm warning so why not have some fun in the snow? Here's a little preview of this year's Christmas card. Wonder if it'll be a snow day tomorrow. If it is I could probably get the card done!
Posted by artboymoy at 10:00 PM 2 comments: